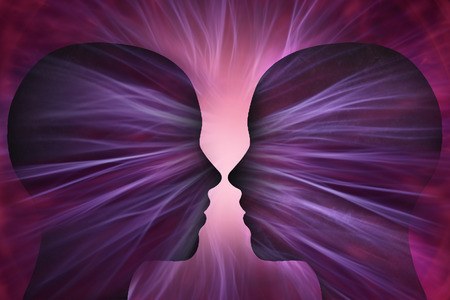 Have you ever had a sense that a loved one was in danger? Do you always seem to know what someone in your life is thinking before they tell you? Or, have you ever had a dream about a person that later turned out to be true? If you can answer yes to any of these, you may have a psychic link.

A psychic link is a connection between two people that transcends physical limitations. It’s a mingling of personal energy that enables individuals to communicate feelings, desires, moods, life events, health, thoughts and needs without any verbal communication or physical proximity – defying both logic and reason.

For example, my mother has a strong psychic link with me. Once when I was very ill, I woke up in the middle of the night feeling faint. As I began to pass out, I remember wishing she could come and help me. Unbeknownst to either of us, she awoke at the exact same time with an awful feeling of panic, even though she wasn’t sick herself, nor aware that I was ill. Her first thoughts were of me. We later realized that these occurrences happened at the exact same time. Similar scenarios have played out with us so often that now, whenever she has some odd pains, she’ll call me first to find out if they belong to me – and many times they do.

What this means is that your feelings for someone can cause you to become extra-sensitive to that person on all levels, seen and unseen. The more invested you are in someone’s well-being, the more likely you are to form a psychic link with them – especially if you think or worry about them regularly. You can see this in the example I have with my mother. Even though I have 3 siblings, the link my mom has with me is stronger than with my siblings because I was often sick as a child, unlike them. This caused her awareness to train itself to continually check into my field and make sure I was okay, forming a strong link that remains.

Psychic links are common among family members – especially between romantic partners or mothers and their children, but they can form with anyone, even if the parties involved don’t like each other or know each other well. Examples of this are links with a teacher, boss, political leader, or even an enemy.

As long as strong emotions are present, including anger and hate, a link is possible. Generally, the stronger the feelings, the stronger and longer-lasting the link. Unusually strong links are often present when there is a past-life connection. An indication of this is if you find that you are easily able to pick up on the thoughts and feelings of someone you just met. In this case, there is most likely a connection from another lifetime with karma that needs resolution. Psychic links are often one-sided, but they can form both ways. A two-way link develops when both parties have mutual feelings for each other and both have an established, intuitive awareness. You see this with couples that have been together for a long time, as they have a practiced resonance and investment in each other’s well-being many years in the making.

To form a psychic link is merely a matter of the direction of your intention and awareness.

Someone who has a strong intuition is more likely to experience psychic links than someone who doesn’t, but they are possible for everyone. It’s simply a matter of realization. Actually, anytime you think about another person you are linking into their field, but you may not realize it because it contradicts your beliefs about reality and separation.

The truth is that there is no separation. Everything in reality is made of energy that exists in the same, unified field, including people. To form a psychic link is merely a matter of the direction of your intention and awareness.

The 20 signs of a psychic link

So, do you have a supernatural connection with someone in your life?

Here are the 20 signs of a psychic link. If you can answer yes to at least two of these, chances are that you do:

The unbreakable bond of spirit

If you find that you don’t have a psychic connection with someone but would like to, it is possible to create one. To do it, simply take some quiet time every day to focus on your intended person. Send them positive thoughts of love and wellness. Try to pick up impressions of their current thoughts or emotions as you feel through their energy. If you continue to do this often enough and over time, a link will eventually form.

Psychic links are amazing, soul-level relationships that connect and align two beings on multidimensional levels. If you have them, cherish them. If you don’t, create new ones to form unbreakable bonds of spirit, capable of transcending the physical to connect all levels of your being, regardless of time or space.